About Free At Last
by Byron Fish - "His Mark" 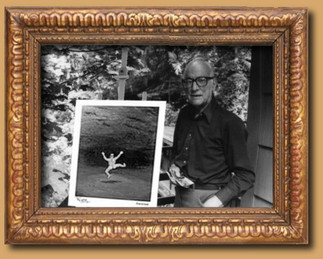 Byron Fish, next to his painting "Free At Last" at his home in Normandy Park, Washington
"Free at Last" was painted in 1947 by Byron Fish, a humorist-columnist from Seattle.  He never claimed to be an artist.  It was really just a joke.

In retrospect, his colleagues and writer-friends thought it was funny that Byron, who was a writer/editor by trade, should gain such notoriety as an "artist."

Byron says in a letter dated 1981, "It ain't art...it's the perfect retirement gift."  Probably 90 percent of Free at Last are bought for retirees, divorcees, job changes, getting out of military service, college grads, even quitting smoking. 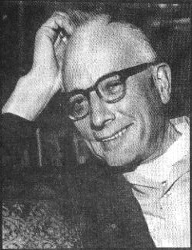 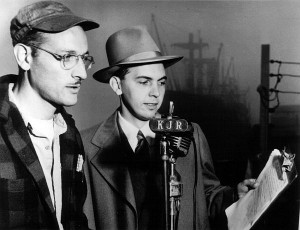 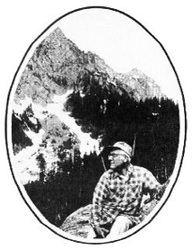 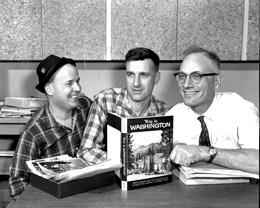 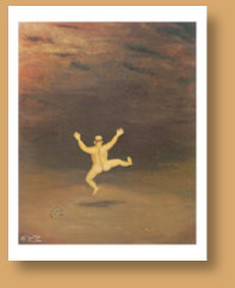 1948 Appeared in "Cruising Puget Sound," a book of harbor descriptions and charts for yachtsmen.

1949 Promotor of Bellevue Arts & Crafts show wanted something everyone could buy. Free at Last was put into a booth, sold 100 copies.

1950-1956 Simpson-Lee Paper Company put out a series of three pamphlets demonstrating the color properties of their line of paper. One of these pamphlets had Free at Last on it. Notoriety and sales grew. Additonal print editions became necessary.

1957-1974 With such publicity and new supply of prints, a slow but steady increase in growth and sales occurred, mostly by word-of-mouth. Travelers who took home a Free at Last would spark inquiries from other parts of the USA, and occasional from other countries.

1974 Seattle Times ran a Sunday feature about Free at Last, then a couple of short follow-ups, sparking a new bonfire in direct sales. The print had become a "cottage industry" as a flood of new orders came in by mail and phone calls.  Dallas Morning News repeated the Seattle Times story, with a full color picture, full tabloid size.  Oddly, from this came only 100 requests and some insight into how this impulse-buy item works: the Texans simply cut out the full color print and used it.  In contrast, the Seattle Times picture was a small black-and-white print and the net result was thousands of orders over the next couple years.

1975-1981  Requests slowed to about 250 per year but included Seattle Times clippings dating 3 or 4 years back. The prints were now being marketed at retail stores such as the Northwest Senior Craftsmen and Ye Olde Curiosity Shop, both of these shops at the Seattle waterfront.

1980-1981  Archie Satterfield (Seattle Post-Intelligencer Columnist) wrote an article about By Fish, wherein he incidentally mentioned Free at Last. This boosted a new interest which led to another Post Intelligencer reader inquiry as to how to obtain a Free at Last print.  The P-I published Byron's address in response, triggering another "flash flood" of requests.

1982  Yet another P-I reader requested information on how to find Free at Last, and once again the P-I published Byron's address. This time the roof nearly fell in, with over a thousand orders plus shop sales increasing 300%.

1982-1996  As Byron slipped into retirement, sales slowed to a small, but steady stream.  Shop sales continued. By this time, requests were apt to come from anywhere in the world as a result of tourists getting copies at the Seattle waterfront and taking them home.

1996 to Present  By's sons carry on with fulfillment of continuing requests for the print.